For the last century or so, language experts have been having a hard time with the conjunction “nor.” For example, in his entry for NOR in The Penguin Dictionary of American English Usage and Style (2000), Paul W. Lovinger considers a perfectly grammatical construction, which he even admits “some grammarians would condone,” but still advises: “Change ‘nor’ to or.”

What, pray, is wrong with “nor”? Lovinger never really explains. But he might try to understand how “nor” and “or” actually function and what they specify, for he also writes: “Nor, like or, links alternatives.”

Not so. The word “alternative” indicates choice. “Nor,” however, does not link choices; it links things which are all excluded, denied, disallowed, or negated. In the online Oxford English Dictionary, the fourth selection in the entry for NOR has this quote by W. E. Gladstone: “Not a vessel, nor a gun, nor a man, were on the ground to prevent their landing.” Are we to think that a gun or a man could have been on the ground? Of course not; both gun and man were kept from being on the ground by little old “nor.” Parents who tell their spirited daughter that she cannot date Tom, Dick, nor Harry, aren’t offering her an alternative.

The confusion surrounding “nor” seems to be of recent vintage. Shakespeare certainly understood the word when he penned: “Not marble, nor the gilded monuments / Of princes, shall outlive this powerful rhyme.” (No one’s gonna correct the Bard, are they?)

Shelley also exhibited a knack for “nor” when he wrote: “NOR happiness, nor majesty, nor fame, / Nor peace, nor strength, nor skill in arms or arts, / Shepherd those herds whom tyranny makes tame.”

As late as 1954, the American novelist Alan Le May showed that he could correctly handle “nor” in The Searchers: “You don’t have to call me ‘Sir,’ neither. Nor ‘Grampaw,’ neither.  Nor ‘Methuselah,’ neither. I can whup you to a frazzle.”

By 2013, however, in Edna O’Brien’s Country Girl: A Memoir we read that as a schoolgirl she had been disappointed that Jesus “had been so curt with his mother at the Feast of Cana, when, worried about the scarcity of wine, he said, ‘It is not my business or thine.’” (Surely Jesus would have used “nor.”)

In 1926, the revered British usage maven H.W. Fowler became the genesis of our bad usage with his venerated A Dictionary of Modern English Usage. In the first paragraph of his entry for NOR, Fowler posits that “He does not move or speak” is the equivalent of “He neither moves nor speaks.” Fowler then explains:

The tendency to go wrong is probably due to confusion between the simple verbs (moves &c.) & the resolved ones (does move &c.) ; if the verb is resolved, there is often an auxiliary that serves both clauses, &, as the negative is attached to the auxiliary, its force is carried on together with that of the auxiliary & no fresh negative is wanted.

Gobbledygook! Mr. Fowler contends that negative force “is carried on” by means of an auxiliary. But the English language doesn’t need auxiliaries to carry negative force onward. Language is linear; it has only one place to go, and that’s onward. The subject goes forth into the predicate; that’s the way language usually works. So the business about “this carrying on of the negative force” is a mite daft. Of course, it carries on. Meanings coalesce as one moves onward, piling up words.

With his fixation on auxiliaries and “resolved verbs,” Fowler shows that he does not fully understand conjunctions. For it is not the leading negative that does the work here; it is the conjunction. Indeed, “nor” doesn’t even need a leading negative. However, Fowler seems to think such usage “is legitimate in poetry,” but not in “ordinary” prose. Although it is now less common, one can still hear this usage of “nor.” For example, in her dispatch from Moscow on February 19, 2014, Fox News correspondent Amy Kellogg said this: “Ukraine desperately needs money, which Moscow, uh, nor anyone would be likely to dispense to a government that does not have control of the country, Bret.”

Fowler offers up several erroneous examples that he attempts to fix. In five of the examples he says that “or must be corrected into nor if the rest of the sentence is to remain as it is,” which is terrific. But Fowler’s disdain for “nor” is so strong that he then goes on to rewrite the examples so that he doesn’t have to use the dread word, and in those rewrites he makes a mess of things. What’s disturbing is that this madness has been sanctioned by language experts on both sides of the Atlantic for at least the last 93 years!

Not everything Fowler wrote about “nor” is nonsense. But if I were Fowler’s editor, I’d advise him not to begin an entry with the Book of Common Prayer unless it is free of sin. This is not the case with his entry for NOR.

Fowler’s tome was first revised in 1965 by Sir Ernest Gowers, (download the PDF of the book and go to page 394 for his entry on NOR). In this second edition, Sir Ernest inserts his own example and corrects it, and it’s fairly interesting:

In this kind of work there was often little oral preparation of material, little systematic collection of facts and views, well assimilated and digested, or much discussion of balance and proportion. The writer has forgotten that he began there was often little and has ended as though he had said there was seldom much. Or must be corrected to nor was there.

Sir Ernest makes a serious mistake here, as he fails to recognize that his example does not contain a negative and therefore cannot be used to illustrate the problem. “Little” is attenuation, not negation. He then compounds that mistake with his correction; replacing “or” with “nor was there” would negate the previous items. But as Sir Ernest noted, the author of the example created the problem with his shift from “little” to “much.” What he (probably) intended would be better said by continuing with the parallelism; that is, by changing “or much” to “and little.”

The snag with that rewrite is that I’m assuming I know what the author intended. But perhaps the author meant exactly what he wrote. After all, his statement is grammatical, and can be read literally, as presenting three alternatives; i.e. little oral preparation, little systematic collection, or much discussion.

Inasmuch as Sir Ernest deletes some of the first edition’s examples, if you want to read all of them refer to the screengrab below of Fowler’s entire entry for NOR. And if you’re interested in what the enskied and sainted H.W. Fowler had to say on other issues of usage, refer to “The Classic First Edition.” British language expert David Crystal provided added notes in the section “Notes on the Entries,” but, alas, there is no note on “nor.”

In 1996, R.W. Burchfield revised Fowler (download the PDF of the book and go to page 527 for his entry on NOR). Mr. Burchfield wisely (and mercifully) avoids our issue altogether. In fact, the third edition seems to have replaced Fowler’s entry in its entirety. Good show, old boy.

In 2015, Jeremy Butterfield revised Fowler with a fourth edition, and retained some of Burchfield’s sensible positions on “nor” from the third edition. Even so, the damage had already been done, as Fowler’s crazy ideas about conjunctions had continued to proliferate among prescriptivists, including the respected American usage expert Bryan A. Garner, who seems to be channeling Fowler when he writes that the “initial negative carries through.”

In any case, the rules of the English language have got to provide for those arenas where expression must be 100 percent unambiguous. If you can’t devise such rules, step aside.

Jon N. Hall of ULTRACON OPINION is a programmer from Kansas City. 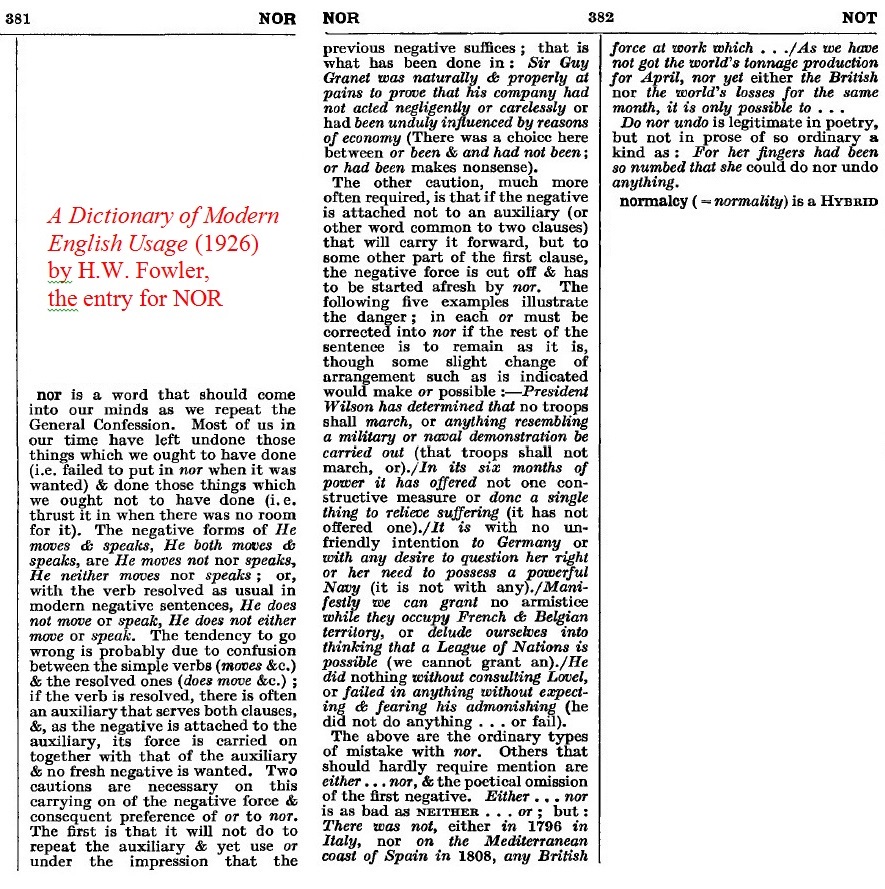 Popular posts from this blog

July 15, 2019
The Senseless Census: A Solution By Jon N. Hall May 26, 2010
The original purpose of the census was apportionment -- the drawing of congressional districts so that each would contain roughly the same number of Americans. To do this, the census must count heads and get their addresses. This has not been a mystery since the advent of computers.
Computers are used in statistical sampling. Jordan Ellenberg, a professor of mathematics at UW-Madison, made an impassioned plea for using sampling in the census on May 1 in The Washington Post. It was titled: “The census will be wrong. We could fix it.”
But in Department of Commerce v. United States House of Representatives (1999), the Supreme Court ruled against the use of sampling in the census. Justice O’Connor delivered the Court’s opinion: “The District Court below examined the plain text and legislative history of the [Census] Act and concluded that the proposed use of statistical sampling to determine population for purposes of apportioning co…
Read more
July 15, 2019
Counting Foreigners in the U.S. Census By Jon N. Hall June 11, 2010
The federal government is currently conducting its decennial exercise: the census. Some may think the Constitution requires the feds to conduct the census in a certain manner. But there are only two iterations of the word “census” in the entire Constitution. One is in the 16th Amendment, which makes the census irrelevant to the income tax. And the other is in Article I, Section 9. 4: “No Capitation, or other direct, Tax shall be laid, unless in Proportion to the Census or enumeration herein before directed to be taken.” The enumeration (or “Census”) referred to is found in Article I, Section 2. 3: “The actual Enumeration shall be made within three Years after the first Meeting of the Congress of the United States, and within every subsequent Term of ten Years, in such Manner as they shall by Law direct.” [Emphasis added.]
As far as the original Constitution treats the census, that’s it. Notice there’s no mention of a spec…
Read more
July 29, 2019 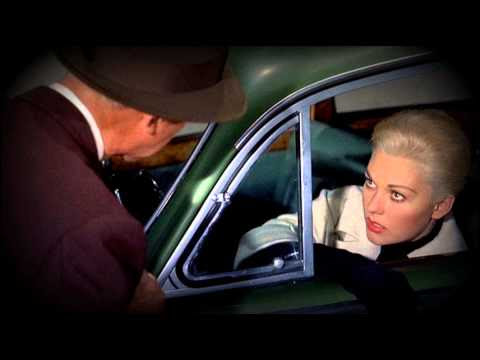 What Makes the ‘Greatest Film of All Time’ So Great? By Jon N. Hall December 2016
(WARNING: here lie embedded videos.)
The first movie that I ever really studied is now regarded by some film critics as the “greatest film of all time.” I discovered it in the mid-1980s after reading a review by James Loutzenhiser, a Kansas City psychiatrist who moonlighted as a movie critic. The review was intriguing enough that I drove out to Watts Mill to screen the thing at the dollar cinema. And there, in that darkened low-rent little theatre began my long and unwholesome fixation with Madeleine Elster.
With that first screening, I knew I had found something special. And soon after, the film ran on cable, so I taped it. That allowed me to screen it over and over again, until deep engrams were burnt into my young brain, leaving it permanently etched with the director’s dark obsessions.
Mostly I watched my find on the weekends. I’d settle on a chilled libation and then settle in to watch my contraband VHS t…
Read more